The Only Aquarium in the U.S. Where You Can Pet A Seahorse

Featured in Hawaii Magazine: “The Only Aquarium to Pet Seahorses in the United States is in Hawaii”

Within earshot of Kailua-Kona’s lava-enclosed airstrip and close enough to the ocean to feel the sea spray, a tiny blue building fronts an unusual aquatic farm, the only one of its kind in the United States. On any given day, Ocean Rider Seahorse Farm is home to more than 20,000 seahorses and I’ve flown from Honolulu on the promise that I would get to interact with one. 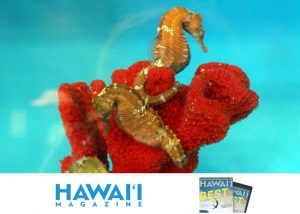 I’m standing near a small, natural tidepool on a less natural sidewalk, staring at a clear Dixie cup of tiny, endemic Opae ‘ula (red volcanic shrimp). They are seahorse food, about the size of a pen tip, and just made the journey to their temporary holding pen via our tour guide Jeff Milisen. An eager young Michigander holds the cup. Though he’s about 7 and I’m … older, we’re both just as excited to see some of the farm’s huge numbers of seahorses, learn what the farmed fish are doing here and hear how 20 species–many threatened in the wild–flourish amid Kona’s black lava fields.

What is known about the strange and winsome Hippocampus is intriguing to say the least: In all 40-some global species of seahorse, it’s the male of each monogamous mated pair that gives birth to hundreds of live young after a monthlong gestation period; their upright posture and prehensile tails allow the slow swimmers to cling to rocks and reef. But there is also a lot about seahorses that remains mysterious. “There are no seahorses that are common in the ocean,” founder and owner Carol Cozzi-Schmarr tells me, and that makes them challenging to study. Despite this, staff at the farm have had to learn what it takes to tame large quantities of wild seahorses and make them feel comfortable enough to breed.

Our small tour of seven follows Milisen to the property’s expansive series of royal-blue plastic vats; the youngest visitors walk on their tiptoes trying to peer in. Beneath the bubbling surface, hundreds of squirming brown American seahorse (H. erectus) fry, just 3 days old, follow the flow of the water. “[In the wild] those babies are just going to be on their own. They’re going to swim off and they’re not going to get any parental care whatsoever. They’re born fully formed and ready to fight off the world,” says Milisen. Less than an inch long, it’s no wonder that only one in a thousand babies survives in the ocean. In the protected captivity of Ocean Rider, Milisen tells us, the mortality rate is more like 50-50.

Changing the Way People Think About the Ocean

This is a huge success for former shrimp hatchery manager and ocean advocate Cozzi-Schmarr. She founded the farm in 1998 with her like-minded husband, Craig Schmarr, as a way to meet the demand for seahorses amongst home hobbyists and public aquariums without adding pressure on already fragile wild populations. “When I was working in Costa Rica and Ecuador [in large-scale commercial shrimp hatcheries], I saw so much devastation to the marine environment. I picked seahorses [to farm] because I thought nobody else would do it, I knew that I had the technology to do it and I could be a kind of ocean ambassador, changing the way people think about the ocean,” says Cozzi-Schmarr. “We want people to think about their marine pets. There’s no need to take [seahorses] out of the ocean.”

In addition to selling some of its stock, the farm also serves as a “living museum of seahorses,” says Cozzi-Schmarr. Many wild populations of seahorses are harvested as ornamental aquarium fish, taken and dried as curios, used in traditional medicines, or are accidentally bycaught in nearshore fisheries. And, because many species are found in shallow water, they also face substantial habitat loss due to erosion, development and climate change. Although just one species of seahorse is officially listed as endangered, 11 species are listed as vulnerable, according to the International Union for the Conservation of Nature’s Red List. Most seahorse species, however, are listed as “data deficient,” meaning the species is either very rare or not enough information has been collected to know enough about wild populations.

Breeding Seahorses on a Larger Scale

When the farm opened, it was only the second seahorse farm in the world (the first was in Tasmania), and few people had ever attempted to breed seahorses on such a scale. Seahorses are finicky creatures, requiring an environment that is just so, and food that tastes just right. Ocean Rider overcame its first hurdle when it settled into its location in an oceanside industrial park in Kailua-Kona. There, Hawaii’s Natural Energy Laboratory was already pumping pristine ocean water from 3,000 feet below the surface for other aquaculture ventures and with the hope that the deep water, when mixed with warmer surface waters, would turn a turbine and a profit with affordable electricity. It didn’t. Ocean Rider continues to use the existing infrastructure to procure fresh seawater, the perfect environment for rearing seahorses.

For years, the farm bred and domesticated seahorses behind closed doors, until it realized it had an operation that people would pay to see. It began offering seahorse encounter tours in 2006. “We’re not Sea World, we’re not here to entertain,” says Cozzi-Schmarr. “We’re here to get people involved; to provide a fun, interactive, educational experience with seahorses.”

Milisen instructs the kids to empty the cups of Opae ‘ula into the vats containing two mated pair of American seahorses. The mere sight of the cup hovering over the water causes the seahorses to unhinge from the wire netting at the bottom and rise inquisitively toward the surface. The shrimp don’t stand a chance and are quickly siphoned away by the seahorses’ tiny snouts.

But, not all seahorse hobbyists the future owners of many of these creatures have access to live, vitamin-packed red shrimp all the time, says Milisen. So, they had to train the seahorses to eat frozen Mysis shrimp. “We’d put some in there and we’d watch them, as they’d watch it, fall to the bottom of the tank,” he says. “That happened for a couple of weeks until we found one seahorse that tried it and liked it. We called him Mikey. You know ‘Mikey likes it?’ Well, Mikey got himself a name, but, more important, he got himself a job. He got to go from tank to tank to tank all around our farm teaching the other seahorses how to eat frozen shrimp. After a couple of generations, we found they were actually being born where they would take the frozen shrimp right off the bat.”

We approach an area of tanks holding seahorses from all over the world. There’s the rare H. fisheri so rare it doesn’t even have a common name found only in the deep sea around the Hawaiian Islands, potbellied seahorses (H. abdominalis) from Australia that live up to their name and even the Pacific seahorse (H. ingens), one of the largest seahorse species in the world. I’m trying to soak it all in but I’m too excited, Milisen has led me back to one of the blue vats.

As instructed, I touch the tips of both of my fingers together, making a grate, and lower my hands into the water. Slowly, he coaxes a bright yellow female American seahorse up to the surface and eases her onto my index finger. She latches where my fingers connect, clinging like a newborn human baby might, her tail assertively looped as it sways back and forth. “Stay, stay, good horsey,” says Milisen. I watch her pectoral fins, on the side of her cheeks, flap rapidly as she balances upright in the water. Her gills pump water quickly. She’s so strange, so fragile, but her grip is firm. She’s unlike anything I’ve ever experienced and something I will never forget.