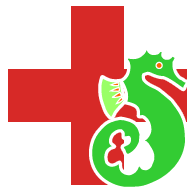 The first rule of successful seahorse keeping is to avoid wild-caught seahorses like the plague.

The hobbyist can prevent a number of disease problems simply by stocking his system with hardy, High Health captive-bred seahorses.

When it comes to the health problems of seahorses, there are several points I cannot emphasize strongly enough:

Many of the medications mentioned in the FAQ’s can be obtained from your local fish store (LFS). Those that are not available locally can be obtained online through National Fish Pharmaceuticals

The second rule of successful seahorse keeping is to provide them with a stress-free environment.

Many of the parasites and pathogens that plague our pampered ponies are ubiquitous — present in low numbers in most everyone’s systems or within the seahorse’s body itself (Indiviglio, 2002). As a rule, healthy fish resist such microorganisms easily, and they only become a problem when seahorse’s immune system has been impaired, leaving it susceptible to disease (Indiviglio, 2002). Chronic low-level stress is one of the primary factors that suppresses the immune system and weakens the immune response, opening the way to infection and disease (Indiviglio, 2002). Long-term exposure to stressful conditions is very debilitating. Among other effects, it results in the build up of lactic acid and lowers the pH of the blood, which can have dire consequences for seahorses for reasons we’ll discuss later.

When disease breaks out in an established aquarium it is therefore generally an indication that something is amiss with your aquarium conditions. A gradual decline in water quality is often a precursor of disease (Indiviglio, 2002). Poor water quality is stressful to seahorses. Prolonged stress weakens their immune system. And an impaired immune system leaves the seahorse vulnerable to bacterial, viral, and fungal infections to which healthy, unstressed seahorses are immune. As if that weren’t bad enough, there are a number of environmental diseases that are caused directly by water quality problems.

With this in mind, it’s important to review the most common stressors of captive seahorses. These include the design of the aquarium itself. A poorly designed seahorse setup that lacks adequate cover and shelter, or has too few hitching posts, will be stressful to the occupants (Topps, 1999). Seahorses are shy, secretive animals that rely on camouflage and the ability to conceal themselves for their safety and survival. A sparsely decorated tank that leaves them feeling vulnerable and exposed will be a source of constant stress (Topps, 1999). The seahorse setup should have plenty of secure hiding places so they can conceal themselves from view completely whenever they feel the need for privacy. It should be located in a low traffic area away from external sources of shock and vibration.

Needless to say, rapid fluctuations in temperature, pH, salinity and other aquarium parameters must also be avoided. A large aquarium of 40 gallons or more provides much greater stability in that regard than does a smaller setup. The greater the water volume in the aquarium and sump, the more stable the system will be.

At the same time heat stress is weakening the seahorse’s immune response, the elevated temperatures are increasing the growth rate of microbes and making disease organisms all the more deadly. Research indicates that temperature plays a major role in the regulation of virulence genes (Olin Feuerbacher, pers. com.). As the temperature increases, virulence genes are switched on, so microorganisms that are completely harmless at cooler temperatures suddenly become pathogenic once the water warms up past a certain point. Thus both the population and virulence of the pathogens are dramatically increased at higher temperatures (Olin Feuerbacher, pers. com.).

This is true of Columnaris and certain types of Vibrio. At cool temperatures these bacteria are relatively harmless, but at elevated temperatures they become highly contagious, virulent pathogens that kill quickly.

In short, it’s doubly important to keep seahorses at the proper temperature. Because of the reasons mentioned above and the fact that water holds less and less dissolved oxygen as it warms up, seahorses generally tolerate temps at the lower end of their preferred range much better than they handle temperatures at the upper limit of their range.

Other Stress – Tank Mates, Over Crowding, Over Feeding, Etc.

Incompatible tank-mates are also stressful for seahorses. This includes not only aggressive, territorial fishes and potential predators but also inoffensive species that are restless, active fishes. Seahorses may be uneasy around fishes that are always on the go, swimming tirelessly back and forth.

In short, if hobbyists provide their seahorses with a stress-free environment, optimum water quality, and a nutritious diet, they will thrive and your aquarium will flourish with a minimum of problems. Preventing disease in the first place is infinitely preferable to trying to treat health problems after the fact. Good seahorse husbandry and diligent maintenance will be rewarded; sooner or later, negligence and poor aquarium management will be punished.

When disease breaks out in an established aquarium it is therefore generally an indication that something is amiss with your aquarium conditions. A gradual decline in water quality is often a precursor of disease (Indiviglio, 2002). Poor water quality is stressful to seahorses. Prolonged stress weakens their immune system. And an impaired immune system leaves the seahorse vulnerable to bacterial, viral, and fungal infections to which healthy, unstressed seahorses are immune.

We are proud to announce that all Ocean Rider Seahorse STAFF are fully VACCINATED for Covid-19.
In order to enter our biosecure facility, please be prepared to show your Hawaii Safe Travel QR code or your Covid-19 vaccination card or recent (72 hours or less) negative Covid-19 test for each member of your group upon your arrival. This is a requirement as mandated by the Hawaii Safe Travels program, and applies to ages 2 and up. You will also be required to wear a proper mask at all times, and will be expected to maintain distances between family groups. Mahalo – we appreciate your cooperation!  Dismiss